So your film’s been optioned, it’s spent years in development and now the script has been approved, the cast and crew are pretty well set… and finally you get that call. I still have the recording of Paula Mazur’s message on my answering machine: ‘I’ve got good news, girlfriend. We’ve got the green light.’
And from the moment of that green light, everything springs into action. Preproduction – finalising cast, crew, locations… all the details so that when it goes into production, the actual filming, no time is wasted. And when that unbelievably intense period of filming is over, there’s post production, with editing and any special effects.
As the author, even if you’ve been a consultant on the script, or even if you’ve written it, you’re unlikely to have any rights be involved with any of these stages.  But if you’re lucky, you’ll be invited to spend time on set.
You’re in someone else’s workplace, you have to obey their rules – but really, it’s not that complicated. This is not the time to suggest that they change something to the way that you envisaged it. And you can probably work out that if someone calls for silence and then shouts, ‘Rolling!’ you need to keep quiet.  The rest of it probably depends on the directors and cast involved – but my advice is: if you get a chance, take it. It’s like nothing else.
I was lucky enough to spend a couple of 3 day periods on set for Nim’s Island, and one for Return to Nim’s Island. It was phenomenal. It’s difficult to describe the emotion of seeing your characters embodied in flesh and blood. The first time I arrived in the middle of the scene with Abigail Breslin as Nim, running down the mountain with a bloody bandage on her knee and Fred on her shoulder. It’s exactly as I described it in the book – and there it was. It was surreal. Of course it also quickly demonstrated the perils of filming with animals: every time Abbie turned her head to speak to Fred, played by the Australian Bearded Dragon Goblet, he’d crossed to her other shoulder. Goblet was more interested in staying in the sunshine than the camera. 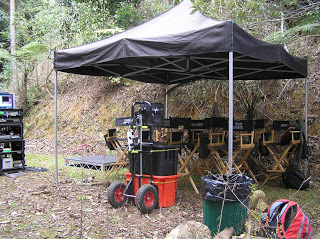 Later I met Jodie Foster and Gerard Butler … and they were so like the characters in my imagination that it was overwhelming, though I didn’t cry till I met the sea lion playing Selkie. In fact the human stars were much friendlier than the sea lion, who I’m pretty sure only kissed me because of the fish in his trainer’s hand. And a few years later, when I met Bindi Irwin playing Nim, it was the same – there, the storyline was different, but Bindi embodied the older Nim just as Abbie had the younger version. 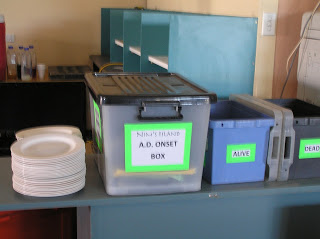 I was also an extra in Nim’s Island – I couldn’t think of a better way to understand a bit more about the whole procedure.  So if you’re watching the film, when Alex Rover is going through security at San Francisco airport, I’m the first person in the scene, putting my bag on the Xray conveyor belt. You won’t see my husband, who went through first and ended up on the cutting room floor, but you’ll see the book’s illustrator, Kerry Millard, behind me, and then the producer’s two children. (In fact you’re unlikely to see me, because your eyes won’t have adjusted yet from the brilliant blue sky and sea of the previous scene, to see the somber airport colours.)

The filming was in the Gold Coast international airport, so we were going through the real security setup – over and over, to have it right by the time Jodie Foster appeared.  And when she did, as I headed back to lay my bag on the belt again, she looked at me and called, ‘So you’re doing it today? Isn’t it boring?’
There were another 200 extras in the room, and I swear there was a single, group intake of shocked breath. Later that night a young man came up to me. ‘Are you family?’ he asked.
‘I wrote the book,’ I said.
Tags: abigail breslin, book to film, book to film; Nim's Island 2; Nim at Sea; Bindi Irwin; movie set;, film production, Gerard Butler, having your book filmed, Jodie Foster, Nim's Island, writing life