Harry the Rescue Dog hasn’t posted in his Rainbow Street Animal Shelter blog for a while, so in penance, we’re sharing a cat story today.

Have you heard of bonded pairs? For this context, they’re animals who’ve lived together and arrived at the shelter together, and the shelter feels that they are too closely bonded to be separated.

When a friend’s Jack Russell dog died, at an enormous old age, she and her teenage daughter decided that they weren’t ready for another dog, but that they would like a cat. One little cat. So they headed off to the shelter, and met quite a lot of cats and kittens, but none that really spoke to them. The worker asked if they’d considered a bonded pair – just about at the same moment that my friend’s daughter spotted these two cats. The four of them of them quickly fell in love, and by the time my friend was asked to come to the office for a special discussion about these cats, she knew she couldn’t change her mind, no matter what dread news was about to be discussed.

This pair of cats, the shelter manager explained, had outlived their owners. The will specified that they were to be cared for in a shelter until someone arrived who wanted them both. Only after the person committed to the cats would they be told that all vet bills would be covered for life; even the annual checkup, worming etc, would be done by house call.

We stayed with my friend last year (we as in husband and me, not Harry) and can guarantee that they were lovely cats, and very happy in their new home.

So, when you’re ready for an animal companion and you head to the shelter to meet them, you never know what story might come with them! And anyone who’s old enough to make a will – i.e.  any adult – perhaps we should think about what would happen to our pets if we should die unexpectedly.

On that cheerful note, a long and healthy life to all of us and our pets! 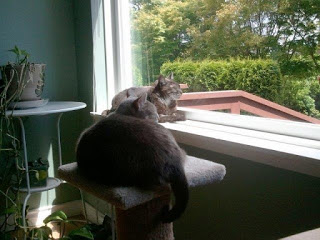 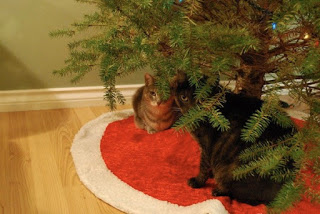 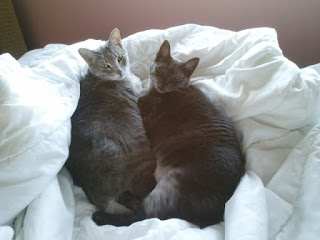 Click here to cancel reply.
Next post: Difficult to judge; delightful to read: the Environment Award for Children's Literature → ← Back to all posts